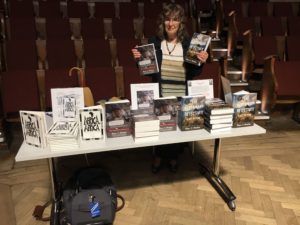 On Saturday 15th July I attended this symposium and had a stand to sell my books. The symposium was a disaster! Instead of glorifying the role that Edinburgh graduates – the doctors, vets, teachers, priests, and engineers had had in building ports, roads, railways, schools, churches, hospitals, clinics, and universities; teaching, healing the sick and controlling animal diseases, the social “scientists” went on about the terrible role that the university had played in the slave trade by accepting money from the profits of slavery. They complained that Edinburgh was behind Glasgow University in unravelling the wicked ways our forefathers behaved: and so judging the mores of the past by present day values.

They went so far as to suggest that the David Hume Tower should be renamed because he was a racialist; Hume was a great philosopher and one of the leaders of the Scottish Enlightenment which was responsible for the prosperity the world enjoys today. Almost the only African man who was mentioned was Julius Nyerere, who apart from being the first president of Tanganyika, translated Julius Caesar into Swahili.   They did not mention that the first South African vet qualified from the Dick Vet in the 1880s,  nor that he was a Cape Coloured! Coming up to the present day Sir David Jawarra (as he became), studied for the Diploma in Tropical Veterinary Medicine during my time at the Dick Vet, having obtained his veterinary degree in Glasgow. He became the first President of The Gambia. In my year was Mike Buada, with whom I have  lost touch but when I was in Ghana, I was informed that he was Dean of the Kumasi Veterinary School.  In the year below me was Ishmael Muriithi, who became Director of Veterinary Services in Kenya and would have gone on to greater things had he not died tragically young. In the same year was Noah Wekesa, who worked in clinical veterinary practice in Kenya for many years before taking up a political career which culminated in his becoming Minister of Tourism. I believe that the University should be proud of assisting these and many other young Africans.

At the end of the morning session we adjourned to the auditorium of the McEwan Hall which is where the stalls were, and where a young Nigerian music scholar  gave a short but delightful recital of Classical and Romantic piano music. Several people showed  interest in my books. We ate a buffet lunch as we chatted to potential purchasers. The picture shows Maxine working on the stand. I did not attend the afternoon session of the symposium which was devoted to the future.  I believe that it should be pointed out to these social “scientists” that Edinburgh University led the way in African development,  and that luckily there were no social scientists around at the time !