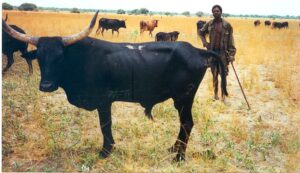 Because  of my age I am very interested in a vaccine against covid19! I was therefore delighted when I heard that the Oxford team had recruited brave volunteers to be vaccinated and then be challenged with the live virus.  This reminded me of the time when I was working at the East African Veterinary Research Organisation in Kenya, where I was part of the ‘Mugug Mafia’ that worked with contagious bovine pleuro-pneumonia, a serious respiratory disease of cattle caused by Mycoplasma mycoides, that in additions to lesions in the chest, also, in serious cases, affected similar organs to those affected by covidd19, especially the kidneys but also other abdominal organs. I was responsible for the production of the  T1 broth vaccine that almost eradicated the disease from Africa. We had serious problems testing the vaccine, because if we injected the pathogenic strain into the trachea of cattle they succumbed to the disease whether or not they had been vaccinated. We had to devise a method to test their immunity. There was another similarity with covid19 in that that when vaccinated the animals showed an antibody response within 14 days, but by six weeks post vaccination many animals no longer had demonstrable antibodies in their blood, despite being immune.

To demonstrate their immunity we had to devise an indirect test, which had been worked out  before my arrival on the scene. Our statistician had informed us that there would need to be a minimum of 16 animals in each group and for our indirect test we required a minimum of three groups; a vaccinated, a control and a group to be artificially infected.  We had to purchase mobs of animals of the same age and size, and because during the trial they would be housed together we had to remove the horns. The animals were randomly assigned to a group and those in the groups to be vaccinated received 0.5ml of the T­1 broth vaccine into the tail tip, and the animals were all grazed together until it was time for the trial to begin. The animals that were to be artificially infected were anaesthetized and a plastic tube was inserted into the trachea;  a fine plastic tube was then passed into a bronchus and a culture of the pathogenic challenge organism was injected into the lung tissue.

Once the donor animals had recovered from the anaesthetic all the animal were put together into a covered yard; their temperatures were taken daily and once a week they were bled and the serum was tested for antibody.   Within a few days the donor animals showed elevated temperatures, and signs of respiratory distress developed; after about six weeks the control animals started to show signs of the disease. Six weeks after the first signs were seen the animal was slaughtered, although some died earlier, and some were slaughtered on humane grounds. After a further six weeks all the animal were slaughtered.  Detailed post mortem examinations were carried out and numerous cultures were set up to try an isolate the mycoplasma. We never recovered the organism from any of the vaccinated animals. By this method we were able to show that the vaccine produced a solid immunity for 12 months and even two years after a single vaccination many animals were still protected, and so we were able to recommend that to prevent disease in their herds, African countries should vaccinate their animals on an annual basis.  I sincerely hope that the Oxford team have the same success with their covid19 vaccine.

THANK YOU FOR THE MUSIC