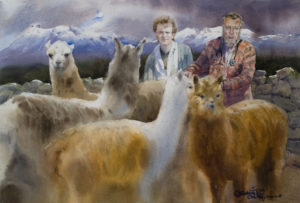 My original intention for the cove of “A Vet in Perú” was to have a painting by Evaristo Callo  Anco, that contained the Andes mountains, alpacas, and  a portrait of me together with my son Richard.  The reason that I singled out just one of my three children was that Richard and I had worked together on a project to investigate the economic benefits to the campesino of controlling parasites in their camelid animals.  Richard had to undertake a project for his “A” Lever examination in Biology and at the time the self-financing veterinary laboratory that I had set up was in a reasonable financial position and so able to offer free veterinary services to the animals of Andean farmers. The reason for the work was to introduce ourselves to the farmers and gain their trust

I sent Evaristo a selection of digital photographs of the volcanoes near the project site, of the herds of llamas and alpacas with which we worked, together with various photos of Richard and me; I explained that I wanted the picture to extend round the spine of the book and he produced this wonderful painting, just as  wanted it and he even had an alpaca looking at the viewer from the spine as the book stood on a shelf.

However, the Publishers decided that a picture of the famous tourist venue Machu Picchu would be a greater attraction to would-be purchasers and decided to use this, although they did add a llama to the cover at my request.  They did agree to use Evaristo’s fine painting as the “frontispiece”. The story of Richard’s project is told in “A Vet in Perú”. 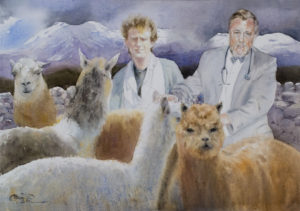 One of the photos I had sent to Evaristo was me wearing a tuxedo: I had sent it to him because it was a good picture of my full face and so the first draft of the picture was  of me wearing a bow tie and tuxedo preparing to undertake veterinary work!  The painting is now in Richard’s collection.  This was soon corrected and the final painting showed us both in working clothes.

Because it was his “A” level project, Richard designed the plan of work with some input from my LABVETSUR colleague and he carried out all the statistical analysis on the results.  Despite my sending a letter to Oundle School, informing them that the vast majority of the planning had been the work of my son, the examiners were unimpressed and Richard only received a “B” grade for his project.  However, he has the satisfaction that the results of his “A” level project being published in two peer-reviewed journals.  He gained entry to Edinburgh University where he read for a Master of Arts degree in biology.