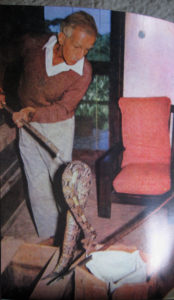 “Conan Doyle was a great writer but he knew nothing  about  snakes.”

The voice broke my revery: I was standing in the Nairobi  Snake Park, looking at a Gabon viper. I turned and saw a scruffy little man with a cigarette drooping from the corner of his mouth;  he was wearing an old bush hat, a dirty shirt and a pair  of shorts that did not require a belt;  on his feet were an old pair of tackies but no socks.

“The Sherlock Holmes  story called the “Speckled Band” is full of errors.  To start with  this snake, being one of the heaviest venomous snakes,  is not capable of climbing down a bell-rope  and even less could it climb back up.  But the biggest error is that this is a venomous  snake that kills with a haemolytic toxins and so the animal bitten will  take days if not weeks to die as the red blood cells are destroyed. The victim would not be found dead within 12 hours ”

I did not know who was this man who was so badly dressed and yet spoke in the clipped tones of an English public school. He was Constantine Ionides – “The snake man”, one of the world’s leading authorities  on snakes, who at the time was living in Tanzania but was making one of his regular visits to Nairobi to bring snakes that he had caught.  The snake park was not just a tourist attraction: the snakes were regularly “milked” for their venom which was used to produce anti-serum to treat people bitten by these creatures.

This one of the many stories that did not get into the final volume of “More Sherlock Holmes than James Herriot – The Veterinary Detectives” . However, I might be able to work it into a later volume.