Reviews of ‘A Vet in Perú’ have been very positive; however, some people have told me that they prefer the first volume because there is much in it concerning Africa, and its wild animals. It is true that the wildlife of the mountains and jungles of South American, cannot compare with that of the plains and forests of Africa.  There is nothing on the continent of Africa that can compare with the marine life on the Pacific coast of South America. We saw more wildlife on a boat trip to the Ballestas Islands than anywhere else in Perú; the sea was very rough and the helmsman had difficulty in holding the boat still so that we could watch the antics of the thousands of sea lions, the waddling of the Humboldt penguins or the pelicans swimming majestically by. The movement of the boat made taking photos a difficult business. Not even the wildebeest migrations in the Serengeti compare with those islands for numbers of birds and animals. It brought home to me, the massive numbers of fish that there must be in the sea to feed all these birds and animals. I thought back to my practice days in Malton, Yorkshire where one of the more interesting clients was Flamingo Park Zoo, which had just opened up in Kirby Misperton under the direction of Reg Bloom who had come there from Windsor Safari Park after working as a game trapper in Kenya.  The zoo was constantly acquiring new animals, including a pair of southern elephant seals which had just arrived from South Georgia; they had travelled each in a large open wooden box and for the many weeks on board ship they had not eaten.  We tried them on some herrings, and one had eaten greedily, the second showed no interest in food.  We released the one that was feeding into the newly constructed pool, and I worked out a diet sheet, to slowly build up the fish intake.  I was at a loss to know what to do with the recalcitrant seal, and I finally decided to give a large dose of mixed vitamins by mouth, to stimulate its appetite; I stood on the wooden case then tickled the mouth of the seal with a small stick! – he responded by opening his mouth to grab the stick and as he did so I poured the medicine down his throat – a primitive but effective technique.  It produced a very rapid result and not the one I was expecting: within a few moments the seal started vomiting and out poured a bucketful of intestinal nematode worms! The seal was released into the pool.  This had taken place on a Friday afternoon and I suggested that they feed the seal with one fish that evening, A second fish was to be give the next morning and two more were to be given at midday, and so the quantity was to be built up slowly over the following week.  I was at a dinner party that Saturday night when the phone went.  Our hosts answered it, and indicated that the call was for me. It was Reg. Bloom, and he was very worried: 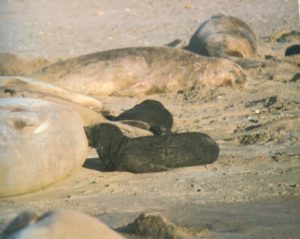 “Can you get here straight away, that elephant seal you treated is bleeding to death.”

“I will be with you in about half an hour: can you make sure that there are two or three people to help.”

I had no idea what to expect or what I would need to do: I always carried chloral hydrate, which, in those days, was a useful general anaesthetic for large animals (the new anaesthetic agents were still not available for vets).  I arrived at the zoo to find at least a dozen helpers round the pool and the seals swimming round in what appeared to be blackcurrant juice; the one who had refused to eat was obviously in some trouble as it was thrashing about and it had damaged its flippers on the concrete of the pool.

“Tell me what has happened, it seems to me that one of the seals is suffering from severe colic.”

Reg. Bloom pushed forward a young girl who was almost in tears.

“Well now we know the problem we can go about sorting it out.  But remember it takes a long time to starve an animal to death but overfeeding can kill in hours.  Can you drain the pool?” I said to Reg. Once we had drained the pool a couple of the workers roped the colicking  half ton beast,  and for the first and only time in my life I gave an intravenous injection to a seal and as the chloral hydrate went in I could see the seal relaxing.  Once the animal was anaesthetized, I was able to give it a detailed examination. Both front flippers had multiple abrasions, which I cleaned with a mild disinfectant solution.  I told Reg. not to refill the pool until the animal had recovered, and the young lady to stick to the diet: I washed up and left.  The seal made a complete recovery. I returned to the dinner party, smelling of disinfectant, but with a good story to tell. Just seeing what one elephant seal could eat in a day and there before my eyes on one small island were thousands of sea lions and hundreds of thousands of sea birds and there were thousands of such islands along the Pacific coast of South America. What a repository of food are the oceans of the world and all the while the boobies were trying to deplete them. 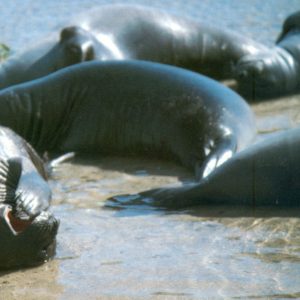