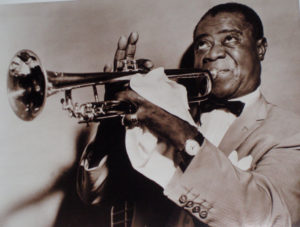 I am a great traditional jazz fan and when Louis Armstrong and his All Stars came to Britain,I went to Earls Court and after a wonderful evening I knew I had to go and meet this man and so went to the Stage Door and after about 20 minutes the group of us were shown into his dressing room.  I was amazed at how small he was in his white dressing gown with a towel wrapped round his head.  He was charm and grace personified and I have that signed programme to this day.  Louis was coming to Nairobi and would be playing in the New Stanley Hotel.  I got up a party and about a dozen of us went off to dine and hear the cabaret.  Among our party was Don deTray, an American vet working on the rinderpest campaign.  Louis and his band arrived on stage (A low cabaret dais really) to tumultuous applause and started to play.  Don turned to me and said

“Do you know that I used to play with Louis when I was a student in Chicago;  I was always broke and playing second cornet to Louis paid a lot of bills.”

“You must go and say hello to him” I said.  After much exhortation from all the party, Don, finally went up to the stage.  Louis took one look at this unexpected figure climbing up onto the stage.  “Duuuuuunnnnnnn”  he exclaimed,  flung his arms out and embraced Don and dragged him off to the dressing room and returned with Don bearing his second cornet and they played together for the rest of the evening: Don was not in practice and his lip was not up to playing much at a time but it got better the longer the evening went on.  It was a wonderful evening.  Louis Armstrong died while we were in Kenya and the East African Standard gave him a marvellous editorial obituary which ended with those memorable words “Blackbird Bye Bye.” 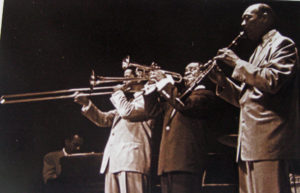