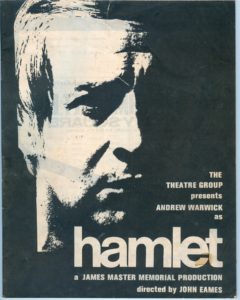 “More Sherlock Holmes than James Herriot – The Veterinary Detectives” I describe mounting a production of “Cry the Beloved Country” by Alan Paton and bringing all the Botswana school children studying the book for their school certificate to Gaborone to see the play.  The idea was not new to me: when I was working in Kenya, the Theatre Group in Nairobi regularly staged the “set book” so that children educated in rural towns, where there was no theatre, had an opportunity to see the play before they had to take their examinations.  I had the good fortune to secure the part of Guildenstern in Hamlet when it was staged in the National Theatre, Nairobi, directed by John Eames, who had modelled his production on that by Trevor Nunn in the Stratford Memorial Theatre. The set and cast were basically black and white and at the back of the stage were these three “Toblerones” which could present a total black, white or mirrored backdrop. We did 21 performances: on Monday to Friday we played to school audiences and on Saturday there was a matinée as well as an evening performance for paying customers.

The play was an artistic triumph for Andrew Warwick as Hamlet as well as for John.  But it was an unlucky show: at the dress rehearsal Claudius made a lunge and tore the ligaments in one knee; by the second night Polonius had lost his voice to a fungal infection and was informed that if he went on the stage he would permanently damage his vocal chords: we were able to find a replacement at only a few hours’ notice. On the second Friday night my foot was so painful that I was unable to put on my boots and so played the show in my stockinged feet. That night I was in severe pain and so on the Saturday morning I went to the doctor. He informed me that I had an infected jigger under my big toenail, (a jigger is a burrowing flea that bores in under a toenail and deposits its egg sac: as the larvae develop the increasing size puts on pressure and it becomes very painful).  The doctor, cut back the nail and removed the sac, dressed and bandaged the wound.
“You must not put your foot to the ground for 48 hours or you might get sepsis.”

I phoned John to say that I could not go on but would sit in the wings and say my lines while someone walked my part.  John had a better idea and from where he got a Victorian basket wheel chair I never found out,  but it enabled Rosencrantz to push me round the stage.  Nobody thought it odd.  By the following Tuesday I was able to get my boot on and gave up the wheelchair.

I enjoyed being part of the team and was often on the stage with little to say and I was able to watch the audience.  Many of the children knew the play well and I could see them mouthing the words.  There was no need for a prompt; should an actor dry up then a voice from the audience set him on his way. I like to think that our productions for the African children helped them with their studies and possibly imbued them with a love of Shakespeare.