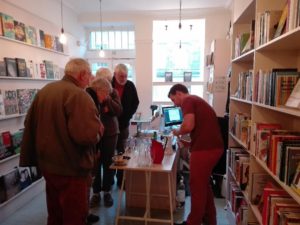 Golden Hare Books in Edinburgh is the most delightful bookshop with very friendly staff: it was the perfect place to launch ‘A Vet in Perú’, and a great place for a Peruvian party. David not only did all the carrying and lifting he poured out the pisco withy élan. A goodly crowd turned up although attendance was reduced by ill health and personal problems. I read out the publishers blurb on the book and spoke about farming in Perú and a little about the British aid project. Aurora Salazar, the Peruvian secretary to the project, was then introduced to the audience. I presented a copy of the book to her and to Joan Taylor, the widow of the project administrator. Aurora then read an extract from the book in which the laboratory team travelled up into the Andes to report to the campesinos the results of a research project on improving the productivity of their animals. I then read about one of the battles that I had with the Ministry of Agriculture vets, in which I lost my temper and was so rude that I thought I would be deported: however, my barbs had struck home and the Ministry staff realized that I was right. I was not deported. I concluded by telling the audience about my feelings for the beautiful country that is Perú and the party continued as the pisco flowed.

Those who were unable to get top the launch should head to Golden Hare Books to obtain their copy of the book. I must thank the staff of the bookshop for helping everything go with a swing. 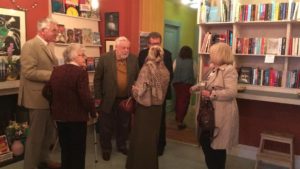